CJ is one of the three playable characters in Eiyuden Chronicle: Rising. CJ is a coming-of-age scavenger. Promotional trailers title her The "Honorable Scavenger".

CJ is a young woman with brown hair and blue eyes. She dresses light in a simple red and white outfit, but is no weaker in the cold for it. She carries her weapons, two climbing axes, in holsters on her legs.

CJ is generally amicable, but naïve, and often allows herself to be distracted by the slightest thing, much to the chagrin of her teammates, especially Garoo. She's not shy about telling anyone what's on her mind, even if it gets her in trouble, but she never refuses to help anyone who asks of her, especially if treasure (or stamps) is involved. 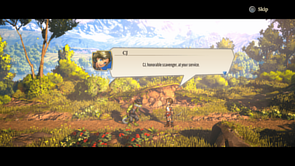 You only have one chance to make a first impression

A young girl from a tribe whose ancestors have been scavengers for generations. CJ came to New Nevaeh to complete her coming-of-age ceremony by exploring the ruins there. The name CJ is most likely a pseudonym used to conceal her real name.

She left home at the age of 15 as part of her clan's traditions. Her goal is to find a great treasure and return home. As per tradition, CJ must bring an item of greater value than that of her parents. As such, she had her eyes set on a rune-lens larger than the one her father discovered.

Arriving in New Nevaeh, CJ would quickly become an important part of the town's outlander initiative, helping townspeople and fellow outlanders alike. This would ingratiate CJ to Isha, who would give her an explorer's license, allowing her to journey to the Runebarrows.

Teaming up with Garoo, CJ and he would traverse the Quarry on the way to their destination, defeating a Lode Golem on the way. She would find a raw lens in its remains but ultimately discarded it as it was still smaller than the one her father had found.

CJ's initial foray into the Barrows proved disastrous, however, as her and Garoo were confronted by the lens bandits. Attacked with runic rounds, the two were blocked off from the Quarry entrance thanks to the debris, trapped in the Barrows. Luckily, CJ and Garoo were able to find a functioning Menhir which deposited them both near New Neveah's Farm.

Realizing that the bandits were likely using the Menhirs to infiltrate the Barrows without needing to enter New Nevaeh directly, CJ reported matters to Isha. Continuing their explorations, CJ and Garoo ended up on Snowpeak thanks to another Barrows Menhir. Traveling back through the Barrows, they came across a dancing stranger. Convincing Isha to help them cross Snowpeak with her magic, the stranger would appear again. Isha would recognize him as her father, Daksa.

CJ readily agreed to Isha's plea for aid in finding her father and finding out what had happened to him, swearing on her scavenger's honor. Returning to New Nevaeh, the group would investigate the growing lens bandit problem outside town. In the Great Forest, Garoo was able to convince them to retreat, much to CJ and Isha's confusion. CJ's plan now shifted to recovering the Humungous Lens and leaving the town, drawing the bandits after her, safeguarding New Nevaeh in the process.

Her travails through the Runebarrows helped unravel Shekhinah's plot, centuries in the making. Realizing that Isha and New Nevaeh were now both in danger from the Barrow's Blessing, CJ realized that the town and the friends she had made there were her most prized treasure and vowed to do whatever it took to protect both. In the weeks following Shekhinah's defeat and the destruction of the sigil powering the Barrow's Blessing, CJ and Isha would plan to leave New Nevaeh at CJ's instance that she could find a way to save Isha from the lens inside her and also find a cure for Garoo's daughter, Allaby.

CJ would also mail her Stamp Card to her father, saying it was the treasure she found. In response, her father sent a letter in return, giving his blessing and explaining that the trial was always about discovering what was valuable to the individual, not uncovering the most expensive or largest physical treasure they could find. The letter also revealed that members of CJ's clans are all named after treasures, her name being "Crown Jewel" and her father "Gold Digger."

Retrieved from "https://eiyuden.wiki.gg/wiki/CJ?oldid=5233"
Categories:
Cookies help us deliver our services. By using our services, you agree to our use of cookies.