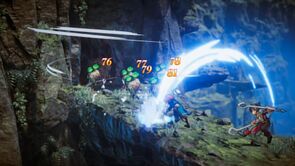 Battles will be turn-based with parties of up to six characters. Characters will automatically be placed in formations that match each battlefield's elevation differences, obstacles, and other unique features. Some terrain will appear to be more complicated than others.

Some form of AI-informed attributes will be involved, at least if one should choose to "auto battle". A form of cooperative attack, styled as a Unite Hero Attack is also confirmed for the game.

Massive battles and one-on-one duels will also be a part of the game with their own mechanics. Duels are said to have multiple choices and dramatic cutscenes, as well as the opportunity to negotiate with your opponent depending on the situation.

During the game, the player will gain access to the fortress town, which will act as their base of operations. By recruiting more characters and helping to expand it, the small base is able to grow over the course of the game.

Stated improvements include the ability to build castle walls to protect from enemy invasions, developing weapons and recruiting troops, and creating items for trade in order to develop businesses such as blacksmiths, restaurants, commerce, builders, and so on.

Once the town gets large enough players can create guilds. There are a number of different guilds available, including knight guilds, blacksmith guilds, cooking guilds, merchant guilds, thieves' guilds, and the hot spring guild. Guilds are said to be pivotal to managing the fortress town as it grows beyond the capabilities of a single person to handle.

Each guild will have requests that can be completed by assigning a character to the task. Each task you complete will earn you rewards, and guilds themselves will allow your characters to learn skills that will help both in battle and in further growing your fortress.

Players will be able to create a farm for their fortress town at some point. There, crops and livestock can be grown as ingredients for cooking, as well as food for the people who live in the town. Expanding and upgrading farm will help to upgrade and develop your fortress town.

Magic and other abilities are accessed through objects called rune-lenses.

By affixing runes to character's lenses, you can give them new magics and skills, or improve their physical abilities. Each character's lens is unique and supports runes of different type, rarity, and quantity. Some lenses may already contain a specialized rune that cannot be removed. Others may require runes of a certain type be affixed in specific positions. When characters level up, the number of runes their lenses hold can potentially increase.

Eiyuden Chronicle is specified to have a high number of minigames and other additional modes. Cooking and fishing minigames were among the earliest revealed and will tie into the ingredients and restaurant mechanics.

An in-game collectible card game has also been confirmed. The game’s cards will feature characters and monsters from the world of Eiyuden Chronicle and you are able to collect cards, build decks, and challenge rivals as you progress through the game.

The game is planned to have a New Game Plus mode for players who have already cleared the game. In New Game Plus, there will be a significant boost in difficulty, and different attacks patterns for existing bosses. There will also be various optional toggles to make the game even more challenging.

New Game Plus will also let you carry over your characters from your previous game, but there's no details on what this entails. 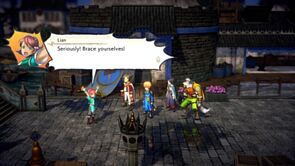 The game is set on the Allraan continent, a land where many diverse nations, filled with equally diverse inhabitants exist. The history of Allraan is that of these people, humans, beastmen, elves, sometimes warring, sometimes allied, wielding both sword and powerful magical rune-lenses.

Among these nations, the Galdean Empire, who invested much research in these magical lenses, began to spread its search over Allraan, hungry for more and more lenses. The game's story focuses on Seign Kesling, a young officer of the Empire who heads this search, and Nowa, a remote village boy who joins the search team and becomes fast friends with Seign.

Where fate will lead them may contain war, but also justice and the truth.

On August 29, 2020, Rabbit & Bear Studios announced their intention to partner with Natsume-Atari to create a Town Creation RPG. This companion title will release before Eiyuden Chronicle itself.

Originally planned to feature a variety of different “lifestyle” mini-games that will give you materials to improve your town. The scope of the companion game grew thanks to the partnership with Natsume-Atari. It is planned for the two games to share assets with Natsume-Atari focusing on the Town Creation RPG so as not to sap resources from the development of Eiyuden Chronicle itself. Several Eiyuden Chronicle characters will also appear during this side-game.

Eiyuden Chronicle was announced on July 24, 2020 on social media and a flurry of online interviews and articles in both English and Japanese. The game launched on Kickstarter on July 27, 2020 with an initial goal of 53,808,516 Japanese yen (roughly 500,000 USD). The title met its initial investment goal in a little over two hours, a period which included Kickstarter being down for 40 minutes.

Additional goals met confirmed console launches for current and next-gen consoles, except Nintendo Switch due to perceived performance issues making such a port financially unfeasible, though the possibility remained if Nintendo has not announced a new console close to the projected game launch in October 2022.

Additional language support has also been secured by a number of stretch goals, adding French, German, Italian, Spanish, Russian, Brazilian Portuguese, Korean, and Chinese (both traditional and simplified) localizations to the game in addition to the default English and Japanese.

The Kickstarter ended on August 29, with a final total of 481,621,841 Japanese yen (roughly 4.571 million USD as of the end of the campaign), with all 45 stretch goals met. It ended its campaign as the 3rd highest funded video game of all-time on Kickstarter. 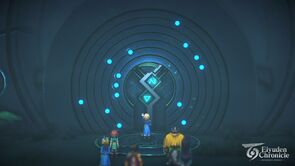 On February 11, 2021, it was announced that 505 Games would be the global publisher for Eiyuden Chronicle: Hundred Heroes. An unspecified delay was announced on May 26, 2021, with producer Yoshitaka Murayama citing positive (increased investment allowing for improved gameplay development) and negative reasons (COVID-19) behind the announcement.

In a Kickstarter update on the day, Yoshitaka Murayama would also announce a third piece of DLC content would be created and released freely to backers, as a result of the successful partnership with Microsoft. On May 25, 2022, it was announced that the game would indeed be released for Nintendo Switch. On August 24, 2022, a new trailer was released for Gamescom, comprised entirely of new footage overlayed with music by game composer Motoi Sakuraba, reiterating a 2023 release for the game.

Retrieved from "https://eiyuden.wiki.gg/wiki/Eiyuden_Chronicle:_Hundred_Heroes?oldid=5207"
Categories:
Cookies help us deliver our services. By using our services, you agree to our use of cookies.