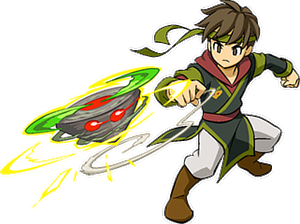 In Allraan, beigoma has been popular with people of all ages for a long time. Shops in town sell beigoma starter kits, customization kits, and other various beigoma-related merchandise.

When the player starts playing beigoma, various other beigoma players will challenge them to duels. Skill tournaments will also be held. the player will meet up with famous beigoma players, learn different skills, and gain many different opportunities to prove to the world that they are the best beigoma player there is.

Retrieved from "https://eiyuden.wiki.gg/wiki/Beigoma?oldid=4140"
Category:
Cookies help us deliver our services. By using our services, you agree to our use of cookies.